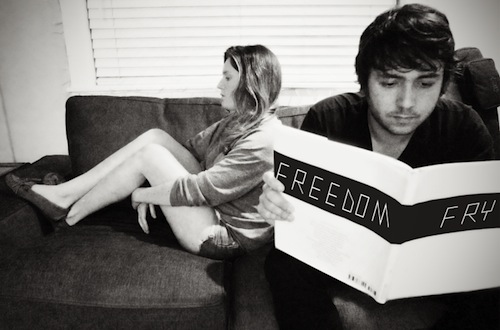 French songstress Marie Seyrat and American musician Bruce Driscoll met on a film set in California a couple of years ago and they instantly knew they had to work together. As Freedom Fry, they released their debut EP, Let The Games Begin, in August 2011 to great reviews and their subsequent single “Earthquake” was named “Single of the week” by French music bible Les Inrockuptibles. Fast forward to 2012 and the duo is back with their appropriately titled new single “Summer in the City”…

Freedom Fry - Summer In The City

Featuring Seyrat’s entrancing whispery vocals and Driscoll’s expert production, this new song is a sun-soaked indie pop gem with an undeniable retro vibe. If you dig this sound, keep an ear out for Freedom Fry’s debut full-length, which is currently in the works… In the meantime, here is a personal favourite, “Tallest Dreams”, taken off the duo’s debut EP!

More info on Freedom Fry’s official site or Facebook. Buy their music on