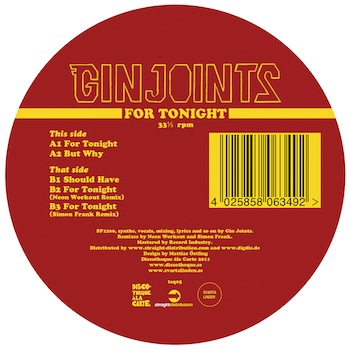 With his roots in the Swedish hip hop scene, Gin Joints was still in his teens when he started DJing and making music with rappers like Planet Asia, Grand Agent, Movits! and Young Ivy. A few years down the line, Gin Joints has moved on from his first compositions and turned to 80s funk, disco and electro for inspiration.

This record maintains the same funky/electro direction as Know The Ledge but this time around the beats are icy cold and the mood is perfect for a mid-winter jam.

For more info and music, find Gin Joints on MySpace. Buy For Tonight now in vinyl stores all over and on