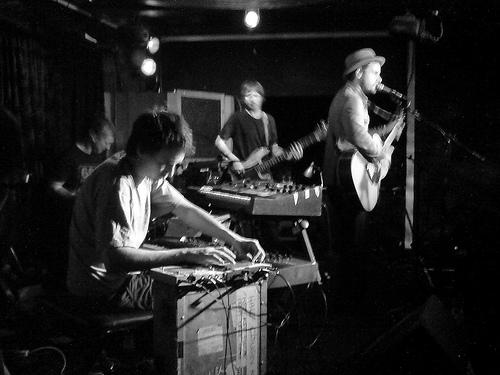 So what do you call a band like Tunng or Son Lux? Electro folk? Folktronica? This is the kind of distorted junkyard pop Half Cousin make in their native Orkney Islands, off the north-eastern tip of Scotland. Their debut album, The Function Room (Grönland 2004), takes its inspiration in the islands’ weather-beaten landscapes and off-beat characters.

Sought after singles “Half Turn/Mrs Pilling”, “Country Cassette” and “The Diary Fire EP” paved the way for acclaimed shows, supporting the likes of Hot Chip, The Earlies and Boom Bip. Numerous collaborations also cemented Half Cousin’s reputation as something fresh and exciting. Kevin Cormack followed The Function Room in 2007 with Iodine to great critical acclaim, with Uncut magazine saying: “Comparisons with Syd Barrett, early Bjork or Devendra Banhart barely do Iodine justice; a thing of wild and magical beauty.”

As before, junk percussion, cheap electronics and family heirlooms prevail but the results are far more beguiling, detailed and, at times, euphoric. Check out the lead single “The Absentee” remixed by Zero 7…

On Iodine, Cormack’s twisting melodies lead the way, giving momentum and focus to the collection of customized sounds. Hints of  Arab Strap or Animal Collective emerge, but always as part of something uniquely its own. Essentially, it all still adheres to his original aim of creating “short, melodic songs made from junk.”

Find Half Cousin band on MySpace and buy their music on