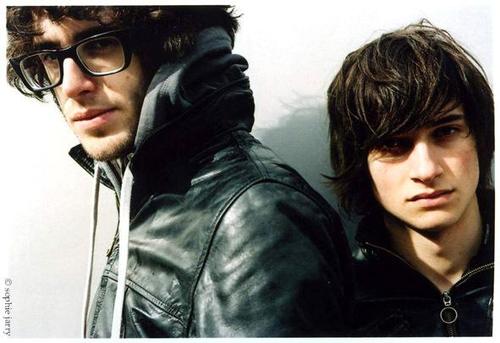 Parisian electro/rock duo I Am Un Chien!! is Douglas Cavanna and David Fontao, two youngsters with a passion for rock music and a lot of energy! Their sound is raw and direct, the kind of sound that grabs your guts rather than your intellect. No wonder the guys are so comfortable on stage, where they can crank up the volume, shake their heads and share their liberating beats with the restless audience.

I Am Un Chien - Waves

Before their performance at the Crossover Festival, we caught up with Doug, David, Baptiste (IAUC’s live DJ) and José (David’s brother and member of Stuck In Sound)…

– Why did you chose this name?

It comes from a Pixies’ song: “Debaser”. In the chorus, they say “I am un chien andalusia”… It’s a band that really influenced our sound.

– Your music is often described as electro but when you perform live with your guitars and synths you sound more like a rock band.

Well, originally David and I had a rock band. We met in high school and started our rock band. We started making electro music by chance, just because we liked playing around with softwares and making stuff. In the end the result sounds more like rock than electro and on stage we like to keep this energy, be close to the audience, interact with people. We don’t wanna be up there playing with two laptops and that’s it…

– Can you tell us a bit more about the music video you made on chatroulette.com?

Actually it was our friend Pierre who showed us the site back when there were only about 3000 people on it and we found it hilarious. Then another friend Franck, who directs music videos, suggested we film ourselves playing our music on chatroulette just to see the people’s reaction. Three weeks later we did it and then edited the clip in 3 hours and put it up online. Then it all went a bit crazy, we didn’t know what was going on, the video circulated on the net, was posted on twitter and that’s how the buzz started. That wasn’t even our intention in the first place. We just wanted to make a little experiment, make a video with no budget at all, broadcast our music to people all over the world and see what kind of reactions we would get…

– When is your next EP out and what is it gonna be like?

The new EP will be out in late October or early November… Big sound! It’s even more energy-filled than the first EP and it shows a different side of IAUC, maybe more mature and with a better sound. A lot more grown-up.. There are really three standout tracks and two guest artists.

– Do you feel like you’re part of the Parisian rock scene?

Well, we’re not really part of the Parisian rock scene because there is NO Parisian rock scene… But we are good friends with a lot of really cool French bands, rock and electro alike. For us, artists have to get together and do things. Being an artist is about making music and create new things together. There’s no point in staying on your own, locked up in your room.

Find I Am Un Chien!! on MySpace and get all their tour dates. Buy their EP on

2 thoughts on “I AM UN CHIEN!! @ CROSSOVER FESTIVAL”