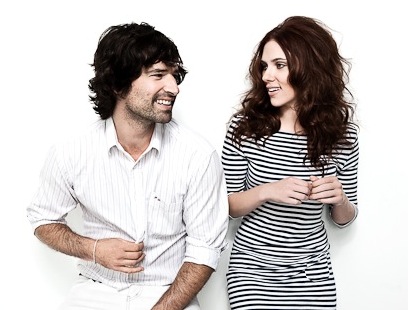 Actress/singer Scarlett Johansson and singer/songwriter/guitarist Peter Joseph Yorn joined forces on this project, a nine-song record reminiscent of the sounds of the 60s. The album of songs about a rocky love affair was recorded quite a long time ago, in 2006, but is only getting released now (CD or digital).

It’s Scarlett Johansson’s second effort, only a year after Anywhere I Lay My Head, her debut album of Tom Waits covers. She sounds more in her element in this record, starting off strong with the bittersweat bounce of “Relator”, which you can sample HERE.

Pete Yorn is already well-established on the music scene. His work appeared on many movie soundtracks and his subsequent albums (musicforthemorningafter, Day I Forgot, Nightcrawler and Back and Fourth) were praised by critics. The concept behind the Break Up album came to Yorn in a dream and was inspired by Serge Gainsbourg’s 1960s recordings with Brigitte Bardot. He wrote a bunch of original compositions and contacted Scarlett Johansson… The result is a finely produced album of light-hearted, retro-pop.