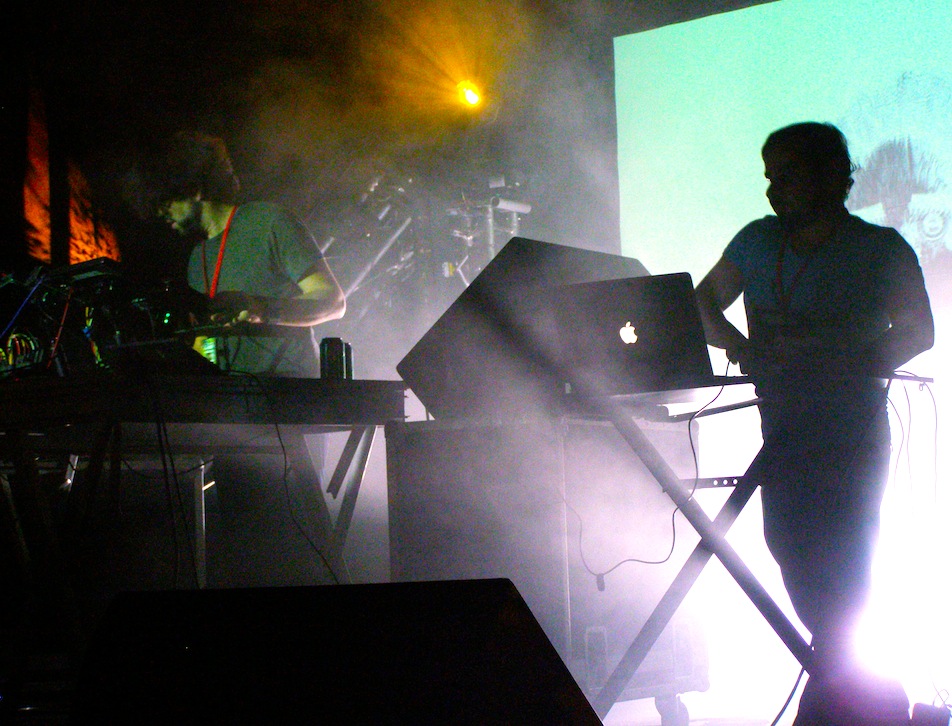 Since his 1999 debut on DJ Hell’s label International DeeJay Gigolo, Florian Senfter (aka Splank!, aka John Starlight, aka Zombie Nation) has been at the forefront of the electronic music scene in Germany. Praised by his peers for his live sets, Zombie Nation has become one of the most sought after electronic acts in Europe.

Mixing a sound that has gotten groovier and less techno-oriented over the years and visuals provided by a live VJ, Zombie Nation’s sets come across as very colourful and lively. Senfter sure knows how to work a crowd! He manages to play exactly the right music at the right moment and to transport the audience to a better place, a place where music rules and dancing is compulsory. Hipsters jump around, club kids move their feet and some the most adventurous crowd surf across the room. It’s wild and out of control but it feels so good! If only this could last forever…

Zombie Nation - The Mind Of Many (Operette Bypass Remix)

We caught up with Zombie Nation on saturday and tried to find out the secret recipe for his magic live shows.

– What can we expect from your show tonight?

There will be some tracks from my last album, some tracks from older lasts and other tracks that I only play live. I’ll be working with my MPC 100. I also use a laptop but it’s not as much fun. Plus, i forgot the battery so my laptop probably won’t last longer than an hour. But even if it dies I can just unplug it and keep playing without it. I like to play with machines, the laptop I use only for sound effects. Machines are more reliable.

– How do you prepare your sets?

Basically I record and store tracks on my machines and then I organise the set according to the event and I add sound effects. So the live set is very lively…

– Your sound has evolved quite a lot over the years? How do you explain this evolution?

Well it would be boring to be doing always the same thing. Electro music, when you play it in clubs, and music in general is always changing. That’s a good thing. It’s not classical music. And actually even classical music evolves with time!

– You have worked with Canadian DJ and producer Tiga, how did that go?

It was fun! We saw each other again last month, he came to spend a week in the studio. We are trying to record an album together so we are working on different tracks. It’s fun but we also have to stay very focused because we have very little to time to work on this. Tiga came all the way from Montreal to Munich. It would be a shame to spend five days together and produce nothing interesting. Of course this adds a lot of pressure…

– Do you follow the work of any newcomers in the industry?

Yes, of course! I check out some blogs, I see what’s happening on the internet. It’s always interesting. I really like Siriusmo. He has a very distinctive style and he doesn’t car about anything. He doesn’t play live sets very often, maybe because he prefers to be in the studio.

– You seem to pay a lot of attention to visuals (videos, cover art…). How do you work with visuals?

Yes, visuals are important for me! This is always what people see first… Cover art work is selected in different ways every time. For example, for my last album I asked people on my website if someone wanted to design the cover art. I got a lot of submissions, which surprised me. A designer, who works at an agency in Munich and whose work I’d seen before, sent me something that caught my attention and this is how we started working together. Next time I’ll find someone else… It’s really interesting to discover new talents! Young designers are more in touch with their emotions and they are often more creative than big agencies.

– Can you give us a playlist of tracks you listen to when you’re at home or when you’re touring?

Wow! It really depends! When I’m at the airport and fed up, I listen to Slayer (laughs). Otherwise, I listen to Curtis Mayfield, a lot of soul music, pop, 70s music… When I’m at home I rarely listen to electronic music. It reminds me of work!

For more info and tour dates head over to Zombie Nation’s page on MySpace. Buy the music on