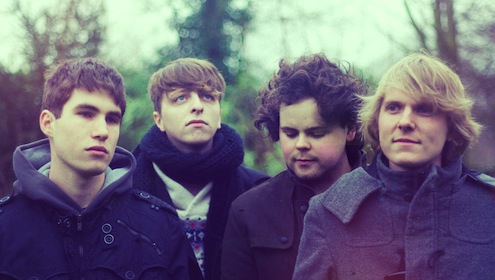 Among the multitude of indie electro band these days (think Delphic, Two Door Cinema Club or We Have Band), it’s difficult to make a difference. And yet this is what this young Belgian band is trying to do. We Seem To Have Misplaced Our Igloo consists of Maarten Moens (vocals, guitar, synth), Tom Vandenbogaerde (guitar, percussion, synth), Esli Gaeremijn (drums, percussion) and Kjelle Vergauwe (bass, vocals), four friends who like indie rock band with dancepunk and new wave influences and who have been making music together since late 2007. They received the Cutting Edge award 2009 for “best Myspace Talent”. That same year they released their first EP, Science Will Bring Us Together, which helped them win some local music contests and get a few major gigs.

We Seem To Have Misplaced Our Igloo - Juno

Early 2011 they released a dual track single “Juno”, in anticipation of their debut album. The title track can currently be download for free in exchange for some Facebook/Twitter love. Find out more HERE and listen to the B-side below…

Vague by We seem to have

Find We Seem To Have Misplaced Our Igloo on MySpace or check out their official site for more info. Buy their debut EP and new single on