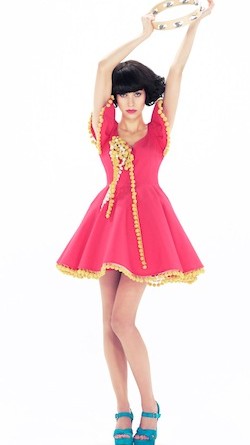 Originally from NZ but now based in Melbourne, Kimbra is not your average female singer, songwriter. Inspired by a range of musical genres and artists, from Nina Simone to Bjork and Prince, she brings a modern edge to the worn sounds of soul, with a voice and artistry that belie her age.

Her debut album Vows was released in Australia last August and shot straight to #5 in the charts. Featuring producers Francois Tetaz (Architecture in Helsinki, Gotye) and M-Phazes (Amerie, Pharoahe Monch), Vows seamlessly combines jazz, soul and funk, puts them through a pop filter, and the result is a stunning first effort for the 21 year old songstress.

Beside her noteworthy chart-topping collaborations with Miami Horror (“I Look To You”) and Gotye (“Somebody That I Used To Know”), Kimbra got a lot of attention last year with the single “Settle Down”, especially after it got remixed by Penguin Prison. Check out this classy electro gem just below!

Find Kimbra on MySpace or check out her official site for news and tour dates. Buy her music on