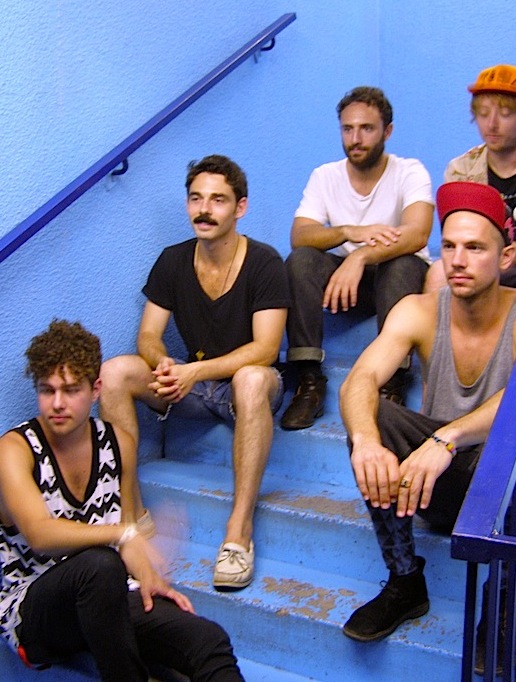 For the opening night of the Pantiero Music Festival, headliners Local Natives were scheduled to perform at 9PM and well before the concert tension was already building amongst the crowd,  waiting in anticipation to see the five Californian wunderkinds perform their magic on stage…

The band fulfilled all of their fans’ wildest expectations!  Performing under a hazy blue light, the no-front-man band proved how well they work together, always balancing stage presence and creating a perfect alchemy that transpired into their music and subtle vocal harmonies…

– You used to live in a house together?

We did. We all moved out of the house cause we move around so much, it doesn’t even make sense to have a house really.. We’re just never home. We’re homeless in a way… We’ve been on tour for a year, with little breaks every few months.

– And during your breaks do you write new songs?

The breaks aren’t long enough, they’re just maybe a few days off to hang out with our girlfriends or family, catch our breath…

– You still find time to write during the tour? Or will take a break after the tour to make new music?

When we write, we write very collaboratively and collectively and so we’ve had some time to write in an individual sense but we won’t really get to dive in the songs until we’re done touring. And we’ll probably tour till the end of this year and so after that we’ll take a big break so we can spend a lot of time to write.

– Are you tired of touring?

No!! Everything has been kind of a new experience for us and it’s been exciting to play for different audiences. We just played in Japan for the first time and it was just insane, it was really cool. I think it’s still exciting for us.

Glastonburry? Oh yeah, it was just wild.. For me, I’m just a huge Radiohead fan and so we played Glastonburry, which is already this huge festival, it’s world renowned, it’s one of the biggest festivals to play. And so we got to play it and on our stage there was a special guest that was supposed to play  and it ended up being Thom Yorke and Jonny Greenwood! And so we’re just backstage right next to them, just fucking around on pianos and guitars and playing these amazing songs that they’ve written. It was amazing!

– What do you think about European audiences?

They seem really open to new bands in a way… In the US it’s taken us a lot longer to get a foot in the door. Maybe that’s just because it’s a big country but it just seems like French audiences and European audiences are more open to new things.

– I read an interview where they said you were Geeks?

We’re geeks?? Oh man!.. I mean, I’ve always said it but I’ve never heard someone else say it. I don’t know how I feel about that… We spend a lot of time on the computer. I think it’s something that stems from the fact that our band does everything ourselves… We still talk to blogs all the time personally. When other bands come in and they all start drinking beer, we come in and get online and email people. Maybe that’s nerdy for your average rock band, I don’t know.

– Are you into the whole Facebook-Twitter scene?

We have a blog, we have Twitter, we have a Tumblr site and all that stuff. And it sounds silly but it is something we enjoy doing… Even just for our sake, just taking pictures on tour, things that we find interesting… In this day and age, it’s cool if you’re a fan of a band, you can connect with them even more so than in decades past. Yeah, it’s something we do all the time.

– Do you have any survival kit when you’re on tour?

Mmmm.. Hot sauce! We brought some hot sauce because no one likes spicy food so in New York we bought two bottles before we left. We survive off of that.

– Any media you’d like to branch out into? Graphic design? Video?

Graphic design is something that we really have a hand in every day, designing shirts, poster and all that. But video is something that none of us really do yet but I think maybe in the future we would to maybe make music videos or projections. As of right now, it’s something we need to learn.

– What about the next album? Any new influences?

Yeah, we’ve developped a lot as a band and I think it’s very natural that we’re definitely gonna push the boundaries in new directions. We just hope that come December, or early next year we’ll start working on a new album. I think that, with how this band works, with us being secluded and involved, and surrounded by each other works a lot. So maybe we’ll find some secluded place to record the album, maybe, who knows? It’s still up in the air, there’s no plan…

It’s great, we approve. We definitely are a band who grew up in the internet age so  when we were just starting to get into music , we were starting to find our music online. I mean, it’s been very  helpful  for us as a new band, having our music out there and available for anybody to have and to listen to. It’s just like a new industry, a different time… I feel that the fact that people are going out of their way to find it and actually download it means that if they like it they’ll support in some other ways. By going to shows, buying merch…  And for us it’s not about the money, it’s about being able to get our music out there and keep doing what we’re doing.-

Find out more about Local Natives on MySpace and buy their debut LP Gorilla Manor on iTunes.