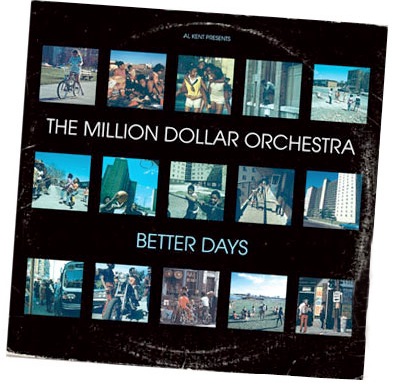 The Million Dollar Orchestra is the crazy project of Al Kent, an avid record collector and self-confessed disco geek. It all started sometime in 2005 when Al, bored with chopping up disco loops to bosh over house drums, and even more bored with the deluge of pointless disco re-edits flooding the shops, decided to take things a step further and create something that sounded like the music he loved, something authentically disco.

So he knocked up some rhythm tracks using drums and percussion sampled from some old disco records and set about looking for musicians to jazz things up a bit… After recruiting Charlie Milne (keys), Stephen Westwater (bass), Kev McShane (guitar), Colin and Alan Train (sax), Gary Kainth and Ryan Buchanan (percussion), Jim Gash (drums), Douglas West (trumpet) and a few guest vocalists, the band played their first triumphal gig at the Glasgow Jazz Festival. The Million Dollar Orchestra was now officially complete! They all headed towards the studio a set out to record what would become a cult album: Better Days.

The Million Dollar Orchestra - Don't Cha Wanna Get Down

Recorded in the most traditional way, mostly one take, in an all-analogue studio, the album recreates the sound of the 70s with amazing authenticity. The sound is rich, lush, string laden, beautiful disco music, full of joy with phenomenal musicianship. It is Al Kent’s biography told in Music. Soulful, funky and totally ready for the dancefloor, the CD and the limited edition double vinyl in gatefold sleeve were well received by disco heads and music reviewers alike.

Fans will be pleased to know the follow up is currently being written, and Al’s building up the strength to start the recording process again. Find more info on The Million Dollar Orchestra and the Million Dollar Disco parties on the official site and sample a few tracks on Soundcloud. You can buy Better Days from BBE’s online store or download it from