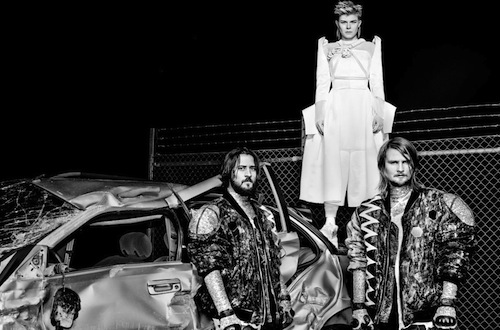 After teaming up in 2009 on “The Girl and the Robot” and in 2010 on “None of Dem”, Swedish pop princess Robyn and Norwegian producer duo Röyksopp have joined forces again for a full-on collaborative 5-track EP called Do It Again. Clocking in at 35 minutes, this “mini-album” combines Röyksopp’s lush, sophisticated electronic soundscapes with Robyn’s offbeat, razor-sharp pop hooks. Check out a snippet of opening track “Monument”, a subdued 9-minute journey into melancholia and also one of the EP’s highlights.

Title track “Do It Again” goes in a completely different direction, bringing in big beats and arena-worthy synths. It has been circulating on radios and dance floors for a few months now and a handful of remixes have also surfaced courtesy of Moby, In Flagranti, Isaac Christopher, Zoo Station, Moullinex and more.

Working together as a band more than as separate artists, Torbjørn Brundtland, Svein Berge and Robyn were all three equally involved “in every aspect of music-making”, turning Do It Again into an ambitious detour in their respective careers.

Sample more music on Röyksopp’s SoundCloud and connect with Robyn on Facebook. Grab your own copy of Do It Again on