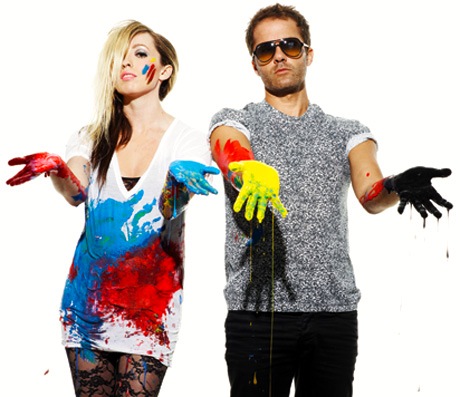 DIY indie pop duo The Ting Tings formed in 2004 in England and released their first album in 2008. After receiving accolades for this multi-million-selling debut and touring the world for two years, Katie White (vocals, guitar, bass drums) and Jules De Martino (drums, vocals) are back with a new single, “Hands”, which will hit the stores on October 10.

This new single is the first taste of their forthcoming sophomore album Massage Kunst. The Ting Tings have definitely avoided a repeat and have evolved into a more electro sound, which probably has quite a lot to do with the fact that Calvin Harris is part of the mix. White and De Martino are keeping the same energy level as in the past but exploring different musical influences to avoid sounding like they’re just taking the same elements and going for a second round.

For the nostalgic, here is a pretty cool remix of one of their most popular tracks “That’s Not My Name”. Taken off their debut, We Started Nothing, the track was reworked by RAC, who really turned it into a completely different song!

The Ting Tings - That's Not My Name (RAC Mix)

The Ting Tings are currently putting the finishing touches on their new album, which should be out within the next few months. To stay in the loop and get all Ting Tings related news and updates, befriend them on MySpace. For now you can listen another remix of “Hands” by Tommie Sunshine just below.

You can purchase all of The Tings Tings’ music on