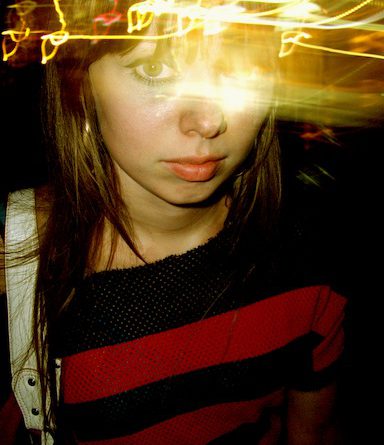 Let’s go back in time a little and introduce Chromatics! They have long been amongst our favourites but never made it to these pages but this is just about to change.

Chromatics are part of the Italo Disco revival that has seen the emergence of other bands such as Glass Candy, Heartbreak or Telefon Boys. They use this musical genre and put their own twist on it, infused with sad romanticism melodramatic string arrangements and dirty disco beats. Check out their cover of Kate Bush’s monumental “Running Up That Hill”…

Chromatics - Running Up That Hill

Based in Portland, the band is the brainchild of Adam Miller, who teamed up with Johnny Jewel (one half of duo Glass Candy) in 2004 to work on a new record and later recruited vocalist Ruth Radelet in 2006. They released the In The City EP on underground label Italians Do It Better in autumn 2007, closely followed by a fully fledged album, Night Drive, also known as IV.

When Ruth grabs her mic and her breathy vocals come out sad and melancolic, the tone is set. “Mask” is a song you listen to at night, in the car or at home, when you’ve just returned from a club but the night hasn’t really worked out the way you planned. With your clothes in a bundle on the floor, the vague smell of cigarette and sweat, you lie down, push the volume up and the room stands still for 5 minutes while emotions rush to your mind and tears fall down your cheeks.

Follow Chromatics on MySpace and buy their music on iTunes.