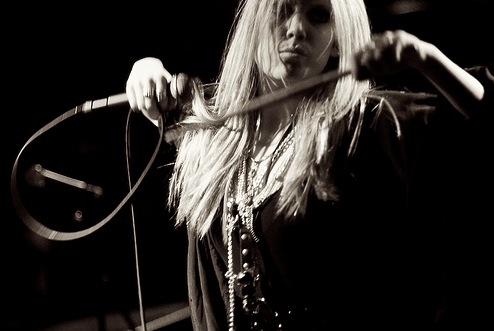 Swedish songstress Lykke Li, who grabbed the attention of bloggers and music critics in the late 2000s with her gorgeous debut album Youth Novels, stayed away from the spotlight for a long time (too long, her fans will say) to write her sophomore effort. Three years it took her to come up with Wounded Rhymes, co-written and produced by Björn Yttling (of Peter Bjorn and John), but these years were well employed.

Following the success of her quirky debut, Li was often wrongly tagged as just another frail-voiced electronic artist. With her new album, the young artist shows a completely different of her artistic persona. This time around her voice is stronger, huskier and darker and her confident presence shines through. With Yttling’s help she has created a sweet and sour album that constantly navigates between the brash and the quiet, eftortlessly combining pouding drums, multilayered vocals and lush textures.

Sure enough Lykke Li’s new tunes have attracted some of the best DJs and producers around and remixes are already popping up left and right.

Stream the whole album on Soundcloud or sign up for Lykke Li’s official newsletter on to get a free download of the new single. Buy her music on